The Parkdale Community Garden is an interactive learning garden. Located in East Aurora, NY on the grounds of Parkdale Elementary. This site is full of resources for school gardens, community gardens and home gardens. Enjoy!

Building a School Garden - how to create a free slideshow

Our Annual Fundraiser is up and running.  Order your beautiful flowering hanging baskets just in time for Mother's Day.

Click here for Order Form
Posted by Nicole at 5:13 AM No comments:

Edible Flowers in the Vegetable Garden

We planted beautiful, flavorful flowers today among our vegetables.  We spoke in Garden Club about the importance of having flowers in the vegetable garden.  Pollinators find these flowers as attractive as humans do so it is beneficial to your vegetable garden to have colorful flowers interspersed.  Some flowers such as marigolds actually deter harmful insects from attacking certain vegetable plants.  The flowers do not necessarily have to be edible but we thought it would be fun.  We sowed heirloom varieties of calendula, nasturtium and marigold.  Look over to the left for more details about these specific flowers.
Posted by Nicole at 7:39 AM No comments: 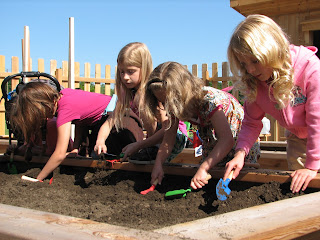 This week the Garden Club sowed kale, swiss chard and lettuce.  This is what we learned:

Kales are believed to have originated during the Middle Ages from the wild Brassica oleracea, most likely in western parts of Europe. Kales are traditionally used in soup, but have similar uses to that of cabbage.  We are sowing Dinosaur Kale (also called Lacinato Kale, named after the Tuscan Town it came from in the 18th century).  It is called Dinosaur Kale because of its distinct bumpy green texture that looks like the skin of a dinosaur.

Lettuce is thought to have originated in Asia Minor, probably from one of the wild lettuce types, of which there are more than one hundred varieties. Lettuce graced the tables of Persian kings, Roman senators, and medieval lords. It has been food for peasant and noble alike for hundreds of years. Lettuce was also prized medicinally for its cooling powers and was used to tame fevers, liver inflammations, and lust. We are sowing:

Jericho Lettuce is a desert adapted variety bred in Israel with smooth sword shaped bright green upright leaves with a silky texture  Cimmarron Lettuce is an heirloom from the 18th century. Also called Little Leprechaun, it is a beautiful deep red romaine.  Paris White Cos Lettuce, also known as Romaine Blonde Marachier was grown in Europe since at least 1835.  Freckles Lettuce, AKA Flashy Troutback is a beautiful tender heat and sun tolerant romaine, having green leaves splashed with red. This heirloom lettuce variety dates back to Austria in 1793.
Posted by Nicole at 8:23 AM 1 comment: 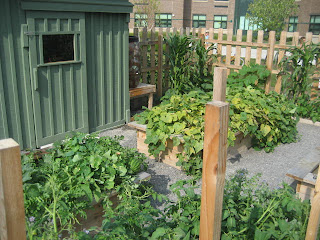 Stay tuned for recipe posts by Mary.  Mary has collected fantastic recipes from students and their families using ingredients that we grow in the Parkdale Community Garden.
Posted by Nicole at 11:19 AM No comments: 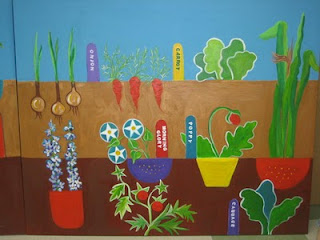 The Garden Club sowed radish and carrot seeds this week.  Here is what we learned:
The radish is indigenous to Europe and Asia. Domestication is believed to have occurred 5,000 years ago. Radishes were well known to the Greeks and Romans.  One of the oldest varieties is the Black Spanish Radish dating back to the sixteenth century. In all likelihood, the variety grew well before that time, but without documentation, seed historians can only guess at exact dates of introduction. We are sowing more than 15 different varieties of heirloom radishes today, including the black Spanish variety.

Wild carrots grow from the Mediterranean to Asia. Queen Anne's Lace is America's wild carrot relative.  The first cultivated carrot variety had branching purple roots and is believed to have been developed in Afghanistan. There is some evidence of a few red varieties around that time period. It migrated to the Mediterranean in the 14th century and then Northwards.  The orange varieties were developed in the Netherlands by the Dutch in the 17th century. Many of today's better known orange heirloom varieties were developed by the French seed company Vilmorin-Andrieux starting in the 1850s, such as Nantes and the Chantenay varieties. Yellow carrots were first recorded in Turkey around the end of the 1st Century.  We are sowing examples of each of these colors today.
Posted by Nicole at 2:40 PM No comments: 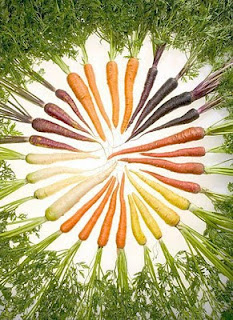 Our Seeds have been delivered and we are ready to start sowing.  We made a decision this year to sow only heirloom or open-pollinated seeds.  We have ordered most of our seeds from an incredible company Terroir Seeds http://www.underwoodgardens.com/.  This company is committed to keeping seed diversity strong and varied for generations to come.  Please see the links to the specific varieties we are planting in the columns to the right of this post.
Posted by Nicole at 4:26 PM No comments: 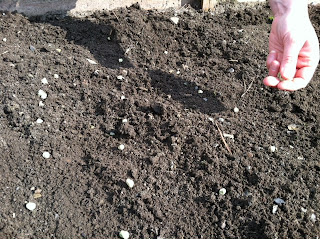 Today some of us adult volunteers planted pea seeds in the garden.  We planted the heirloom varieties Lincoln(shell pea) and Cascadia(snap pea).  They do not need staking since they only grow to about 3ft tall, they support each other.  We planted them three inches apart intensively.  Intensively means three inches apart on all sides, not in rows.  They will be ready to harvest in about 70 days.
Peas have enchanted humans for thousands of years.  Dried peas were found in 7000 year old burial sites in Europe.  They originally were cultivated in the Eastern Mediterranean.  They were a standby of the Egyptians, Greeks and Romans.
Posted by Nicole at 7:27 AM No comments:

Seeds we are sowing in the garden in March

Seeds we are sowing in the Garden in April

Seeds we are sowing in May